DANIEL HUGHES | ON CYCLING ADVENTURES AROUND THE GLOBE

We caught up for a coffee and a chin wag with friend of Quella Daniel Hughes in the London suburb of Stoke Newington.

Daniel Hughes has had some amazing adventures in his lifetime – passing selection for the Special Forces, placed the first Red Nose and made the world’s highest video call from the summit of Everest to the BBC Newschannel, raced two world Duathlon championships, raced as a pro-cyclist and flies around the world as a 787 pilot.  In recent times, he has combined his travel with his love for cycling and photography to create beautiful content for his website and Instagram accounts that has lead to sponsorship with some of cycling’s top brands including Shimano, Silca, Panaracer, Hexa helmets and Strava.  When not riding one of his factory issued Basso bikes and filming in some of our planet’s most extraordinary places, he can be found bombing around his home town of Stoke Newington with his wife Carali on a pair of Quella Stealths. 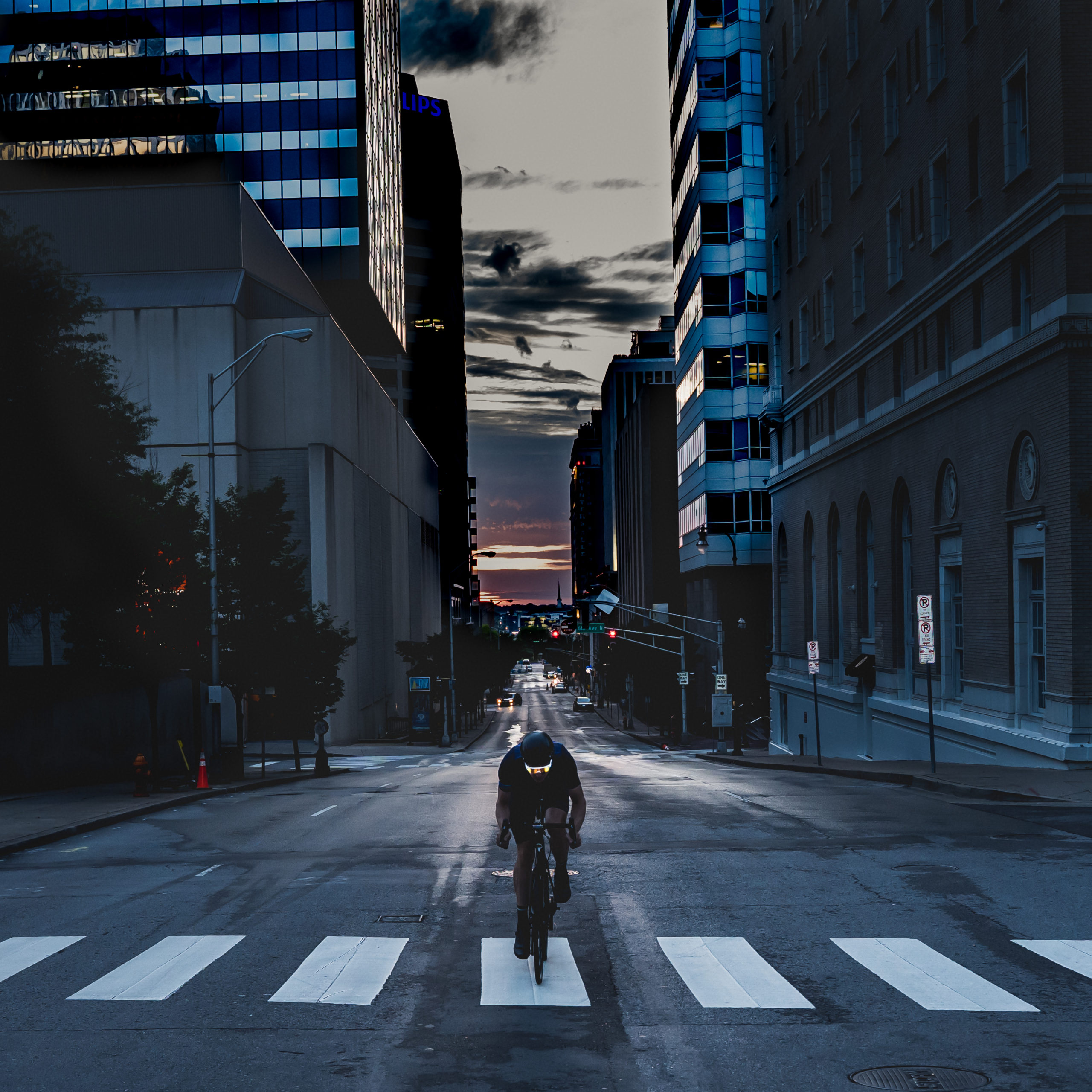 YOU HAVE POSTED SOME INCREDIBLE FOOTAGE FROM ALL OVER THE WORLD, WHAT ARE THE STAND-OUT DESTINATIONS AND RIDES?

I’m spoilt with all the places I get to go to, but this year I’ve had two really standout sets of riding.

Having flown to Oman a few times, I’ve always gazed in awe at these mountains, and at the beginning of 2019 finally got to ride them. Imagine three days of gravel riding, where you’re in valleys where no-one goes. Trails and paths where maybe a goat herder goes once a week. Super remote and totally epic riding, in fact I’m going to say it’s the best riding I’ve ever done.

I’ve actually done this climb a few times, but this year I went to photograph it for Cyclist Magazine and MAAP. 56 switchbacks, 3 valleys and over 3000m of climbing to get to the Ski lodge at the top. For me, this is a world top 20 climb and nothing can prepare you for the views as you cycle in awe of the majesty of the Andes.

There are loads more photos from Oman and Santiago on my Instagram @danielhughesuk (plug!!)

ANY TALES OF ADVERSITY THAT YOU CARE TO SHARE?

How long have you got! I’ve had a fair few near death experiences, from a near head on collision flying with the air force (civilian aircraft busted military airspace and tried to land on the runway I was taking off on!), twisted lines around my feet parachuting where I had to cut away the main chute, plenty of interesting experiences with the SAS and of course I’ve scared the shit out of myself plenty of times on my bike. Worst? Actually a car which deliberately knocked me off my bike in California and left me for dead. Twat!

IS THERE ANYWHERE COMING UP THAT PARTICULARLY EXCITES YOU?

I’ve had an amazing run this year, from the rides above, cycling on the great wall of China, gravel in Morocco, riding in Rio De Janeiro and more. I try to do at least one “badass” adventure each month to share with my partners and my channels. Coming up I’ve got 5 days of riding from Munich to Feltre with Rad-race tour de friends with 500 hundred riders, where it’s not a race but one massive party involving bikes, after ride parties and climbs like the Stelvio pass!  Definitely looking forward to that one! Also got a week of riding in the Pyrenees, mapping out unchartered gravel routes in September and more gravel in October in South Africa where I’m doing the worlds only 7 day gravel race as a rider / photographer for Hotchilee.

HOW IS THE BUCKET LIST LOOKING?  ANY BIG CHALLENGES ON THE HORIZON?

I get asked that a lot…what’s next! And yeah for sure I’m always on the hunt for exciting things to do. I get excited and bored easily. I guess the gravel world champs in August, but other than that lots of mini adventures this year. Next year will be off the scale and have already mapped out most of it.

YOU RIDE A LOT OF GRAVEL AS WELL AS ROADS, WHY? WHAT’S THE ATTRACTION?

Until 2017 I had never even heard of gravel riding, which I guess is like most people. It all started when I started flying out to Austin, Texas and met Colin Strickland who recently won Dirty Kanza. He is a beast of a rider, but our riding styles / way we train is very similar. Basically we like to do long rides where we bludgeon ourselves (290- 300w av for 100 miles), and the routes we’d do would involve plenty of gravel roads in and around the middle of nowhere.

It was this freedom and lack of cars which really appealed, it feels more dynamic and more adventurous than riding on paved roads. With a gravel bike you can ride pretty much anywhere, a swiss army tool of bikes.

From a racing point of view it really suits me also, I guess I’m a rouleur. I’m able to hold high levels of power for a long time, like a diesel motor, and that is definitely rewarded in gravel racing. The other rewards are that it’s super chilled, but yet highly competitive nature. Dirty Kanza is littered with World Tour and Pro riders, but no-one is on rollers before the race. Most are enjoying a few beers the night before and everyone is there for a good time. But don’t get me wrong, as soon as you’re out of the neutralised area its full gas and most races the average speed is circa 20mph for 200 miles.

My racing? Well last year I served mainly as a domestique for Meteor Giordana, a Pinarello Factory team.  During that season, I was super happy (and I guess very proud) to win and set a course record on the South Downs Way race. Damn, that’s a hard course, both in terms of the surface and its challenging terrain and there’s a reason why people normally do it on mountain bikes. The surface is so brutal, your spine and body feels like it’s about to snap. For sure, I took a lot of risks, and at times was going over 50mph on the grass and chalk descents but it was worth it to take the win!

IS A GRAVEL BIKE VERY DIFFERENT TO A ROAD BIKE?  WHAT ARE YOUR WEAPONS OF CHOICE?

Every manufacture builds their gravel bikes to handle different sized tyres, but everyone now is pretty much offering the same thing. Compared to a road bike, the differences are a longer wheel base for stability, more relaxed front tube for comfort and the ability to put large volume tyres.  You can even fit 47mm tyres on some models which is close to mountain bike tyre. The beauty about these bikes, is that if you have two sets of wheels you can have a pretty capable road bike with 28mm tyres and a gravel bike with 42mm tyres and flip-flop between the two in seconds. Genius!

What do I ride?  Well last year I was riding a Pinarello gravel bike, but have recently been sponsored by Basso, another Italian brand. I’ll be riding their Diamante SV road bike and their Palta gravel bike until the end of the season. Definitely excited about the partnership and hope to extend until the end of 2020. They join me with some other hitters such as Shimano Global, Silca, Panaracer, 100%, Strava and HEXR.

YOU WERE A SPONSORED RIDER FOR A WHILE, IS THE RACING CAREER OVER?

I really enjoyed my time racing with Meteor Giordana, and actually it was the other contracts that I was offered which meant I couldn’t race with them anymore. There’s nothing like pushing yourself to total destruction, hunting for the individual or team win.  However, the biggest gravel races are out in the USA (thousands and thousands of miles of gravel) and logistically that is tough. Over here in the UK there are gravel races, but when given the choice of doing a race compared with travelling to Girona or somewhere exotic for the week, I’m enjoying the adventurous riding more.

WE NOTICE YOU ARE A BIT OF A ‘HILL HUNTER’ – WITHOUT THE RACING, WHAT MOTIVATES YOU TO PUSH YOURSELF SO HARD?

It is weird, I’ve actually turned into not a bad climber, I guess due to the fact most of the places I enjoy riding the most are lumpy / mountainous. In terms of pushing myself, I’ve always been able to do that. To take myself to a “special” place and totally destroy myself where after I’m physically sick. Is that healthy? Probably not! But I need it, much like I need carbs!

WHAT CAME FIRST THE CAMERA OR THE BIKE?  DID YOU HAVE ANY PHOTOGRAPHIC TRAINING?

Hmmm good question! Well technically the bike as I’ve ridden bikes for as long as I can remember but, in terms of taking things seriously, I reckon the camera actually. I’ve always been snapping and been the photographer. I wish more of my mates would get into it, as they always get shots, and I don’t!  Formal training? No. All learned on the job so to speak.

HOW DOES THE ‘SELF-PHOTOGRAPHY’ PROCESS WORK WHEN YOU ARE RIDING ALONE?  WHAT KIT ARE YOU USING?  DO YOU WORK WITH OTHER PHOTOGRAPHERS?

I get asked that a lot! I’m using a Sony A7 mk3 as my primary camera, and if I’m on my own I set it up to take timed shots. I do the same with a drone. 99% of the photos on my Instagram I’ve taken myself, and if not you’ll see a credit to the photographer.

It’s amazing what you can achieve on your own, and once you’ve done it enough you know what shots will work, and I can grab a shot in less than 5 minutes. It would however be pretty sweet to have someone with me all of the time, but then in many ways I’ll be doing myself out of a job, as I do a fair bit of rider / photographer work.

THANKS SO MUCH FOR SHARING.  AS A FINAL QUESTION, WHAT DOES DANIEL HUGHES DO ON HIS DAYS OFF OR ARE YOU TOOK KNACKERED?

Day off! I tell myself often, that I should chill more. Put my feet up and do nothing, but I get restless easily. You’ll be happy to hear this, but getting a Quella has been a total riot. I really enjoy nipping around London to go see my mates on it, and run it as a proper fixed gear. Already I’ve scared the crap out of myself with a nice pedal scrap and gone to answer my phone thinking I could relax my legs. Wrong! Fun times…